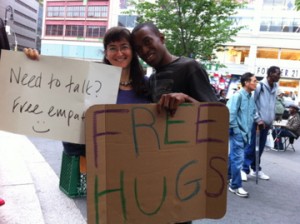 This afternoon I headed to Union Square in Manhattan, and found a bustling urban park teeming with life.  The park contains green spaces as well as a paved plaza.  I walked all through it, marveling at the sheer number of people, before choosing a spot right next to the subway entrance.

To my immediate left, several outdoor chess matches unfolded.  Right in front of me stood a man with a booth representing “the 99%,” who blew a whistle in a rhythmic way reminiscent of a protest chant, about once per hour.  Just slightly beyond him, a quartet of hare krishnas chanted and sang.  And all throughout, people of all ages, colors, and languages walked and talked.

I set up my sign.  Within about 30 seconds, I heard a young woman’s voice saying, “Free empathy?”  I looked up and met her eyes as she continued, “If I had time, I would sit down and have a heart-to-heart with you right now!”  Alas, she did not have time.  She walked on.

After that, I found myself talking to a number of people from Eastern Europe.  The first pair were two young men from Kosovo.  They were curious about what I was doing, and seemed inclined to chat.  One seemed to fancy himself a sort of joker/philosopher, and kept asking me questions like, “If there is so much more water than earth on this planet, why do we call the planet Earth?”  His friend described arriving in the United States a year ago, speaking almost no English.  He said he loved New York, has a job now, and is happy to have made the move.

After a few minutes, we were joined by a cheerful young man from the Ukraine, who was happy to supply his own definition of “empathy” when the other two asked.  His definition was different from mine; he focused on intuitive understanding of another’s emotional state, often from a distance or with no verbal exchange.  He said that he was very empathic himself, and enjoyed talking with people whom he sensed were troubled, since he found he could often help them to feel better.  He also said that anyone can hone this innate ability, and it helps to release everything we think we care about.  He himself had been thrust into homelessness and destitution a few years ago, and found it very scary at the time, but later appreciated it because through “losing everything” he was able to gain this powerful ability.  His material circumstances had since become more comfortable, I gathered; but he retained the ability, and recommended the experience of “releasing everything.”

After these three left, a man who had been sitting nearby turned to ask me about what I was doing.  He was from Italy, he said (and possibly another place in Europe, too – he spoke quietly and with an accent, so I had a hard time hearing everything he shared.)  He, too, wondered what empathy was, so I described it as “listening with caring.”  He told his story of coming to this country, and encouraged me to move to New York, saying that it was great and that he could help me find a job.  (He also asked me for my phone number, which I politely declined.)  I told him I was enjoying my visit, but that I love Portland and plan to continue living there.

Shortly after he and I stopped talking, a self-described “geezer” from Hungary arrived, taken by my sign.  He told a touching story about his father’s having been a political prisoner for ten years.  During his incarceration, the father managed to make small wooden blocks with letters carved into them, and smuggled them out of the prison to his young son (the man talking to me) who was able to use them to teach himself to read and write. Wow.

After he left, another young man – American, apparently born in this country – approached and asked what empathy was.  I told him, as best I could, and he seemed to like the idea, although he didn’t have much more to share.  He moved on.

Then another young man came up, and asked me to differentiate between empathy and sympathy.  I told him my understanding (which is based on Marshall Rosenberg’s distinction) and he seemed to agree.  We had a rather long talk, about a variety of topics including the changing culture of business – especially the financial sector – in America today.  From his insider’s perspective in that industry, he could see that the old norm of high-pressure sales was being replaced by a relationship-building, trust-based model.  I enjoyed hearing this.

While we were talking, I caught sight of a young man walking through the square holding up a “free hugs” sign.  I smiled as he came near us, and jumped up to show him my sign.  We hugged, and got a few pictures together.

As he left, the man I had been talking to expressed suspicion about the “free hugs” guy’s motives, surmising that it could simply be a tactic to get women to hug him.  I smiled at what I imagined as a more “New Yorker” reaction to it than the “Portlander” reactions I had seen from many of my friends back home, most of whom love the “free hugs” idea, and some of whom have carried such signs themselves.  Then, I wondered if perhaps this New Yorker was correct, about some men who carry these signs.  I wondered if I, and my left-coast friends, might be blinded by idealism and naivete at times.  Probably so, actually.  But, I’m pretty sure I’d rather err on the side of trust than suspicion, most of the time.  A lot more magic can happen that way, I find.  I also tend to find that people live up to my expectations, be they positive or negative.  I certainly didn’t lose anything by hugging this guy today; I think we both gained something.

After that, it was getting cold and starting to rain, so after this longer-than-usual session, I packed it up and headed to check out a vegan restaurant nearby.

Heavy rain is forecast for tomorrow, so I believe this will be my only empathy session in New York.  I had been a little nervous that people here might be more stand-offish, or even sarcastic or contemptuous of me and my sign, given the stereotypes I had heard about New Yorkers (mostly, I should mention, from ex-New Yorkers.)  But I found myself once again reassured that we are all human, and people enjoy connecting with each other.

Next stop: our nation’s capital!

6 thoughts on “Empathy in New York”