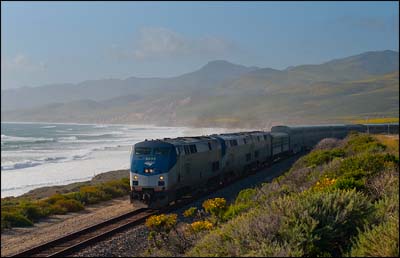 My southbound train trip is fast approaching, and my excitement about it is building daily. I’m definitely looking forward to taking a break from Portland’s wintertime rain and cold … and I’m also really looking forward to expanding my Dream Into Change reach to more people and more cities! I am in the final stages of securing transportation and lodging, and now it’s time to turn my attention more fully to the connections I’m seeking to foster during my travels. Along those lines, I would love your help!

My itinerary is as follows:

Then back to Portland!

My intention is to offer my four-hour workshop (“So you grew up … What do you want to be NOW?”) in each location except for Santa Barbara. If you are interested in signing up for the workshop, and/or helping to promote it and/or willing to offer your home as a venue (in exchange for free admission to the $40 workshop) please let me know as soon as possible, by emailing me at maren@dreamintochange.com.

My other intention is to meet with as many people as possible in each city who are doing innovative work in one of my four main areas of focus: 1) veganism, especially in an educational, advocacy, or entrepreneurial role; 2) sustainable energy and transportation, such as bicycle advocacy or innovation or solar advocacy or innovation/entrepreneurship; 3) touch-positive and/or sex-positive culture, and/or ecstatic dance; and 4) Nonviolent communication (NVC) and/or restorative justice, including prison reform or innovative projects relating to incarceration and/or transition into society for inmates upon release.

I would love to talk with any of these folks to hear about their projects, and possibly also to interview them for this blog and help to spread the word about their work. So, if you know anyone who is involved in any of the above, again, please contact me at maren@dreamintochange.com to let me know about them (and/or please forward my contact info to them).

This trip represents a very exciting beginning for me. I want to expand my reach beyond Portland. I want to work with people from all over the country – and indeed around the globe – to move our culture forward in all of the above ways. In the future, I plan to take more train trips, to other regions. Possibly my next trip could take me to Seattle, Vancouver, Minneapolis, Chicago, Toronto, and/or Montreal! The next one might include Boston, New York, Washington, and Raleigh, NC. Other future destinations include Victoria, BC; Austin, TX; Melbourne, Australia; and London, England. Yeah, I’m feeling pretty adventurous!

But first things first. In about a week and a half, my first great rail adventure will begin! I can’t wait to experience California, and I can’t wait to see some of you there!

OK, I’m slowly catching up this month! There has been so much goodness, it’s hard to keep up. Let’s get into it:

Wow! How time flies. My “weekly” digest is a tad late. Sorry. Better late than never, though, right? (Look for the “late December” edition next week.) Let’s get to it!

Thanks for reading! Keep your dreams alive!

Tonight was my final night as a volunteer at the Oregon State Penitentiary, helping to teach Nonviolent Communication (NVC) to a class of long-term inmates, most of whom have committed one or more violent crimes. The year-long experience working with Rose City NVC’s Oregon Prison Project – which was unlike anything I had ever undertaken before – was very powerful for me. I’d like to talk about it a bit here, to share some of what I have come away with.

Tonight, in our final class, I was given the opportunity to go around the room and tell each student how he had touched my life during the year. It was a very meaningful exercise, and I was struck that in day-to-day life we rarely give ourselves and each other cultural permission to speak so openly to others about how they touch us. Some of the men seemed a little uncomfortable hearing this feedback, and I realized how unfamiliar it probably was to most of them. They are accustomed to hearing people’s feedback about what is “wrong” with them, and about the mistakes they have made. With the exception of certain friends and family, most of them probably do not receive much reflection of what is “right” (or simply human, with all the beauty that inherently entails) about them.

When I started the year last fall, I was nervous to think about entering a prison, especially a maximum-security one. I had been feeling an inner calling for several years to work with prisoners, although I didn’t know why; and NVC had enriched my life so much in the ten years I had been aware of it that I was yearning to find a way to help spread it. So when I heard about this opportunity, I knew I needed to proceed with it, despite my fears. But I admit that the first time I went through all those locked gates, and found myself standing in a large room with men in blue walking around, I thought, “Wow. These are prisoners. Am I going to be safe here?”

But when we went upstairs and set up the classroom, and the students began to arrive, I was amazed by how “normal” they all looked, and how friendly and polite they were. I kept looking around the class that first day, thinking how if I hadn’t known I was in a prison, I would never have looked twice at any of these guys; they looked like my friends, coworkers, and community members. They varied by age, race, and apparent socioeconomic backgrounds, and their personalities were as varied as one would expect to find in any social setting. In other words, these weren’t “criminals,” with some sort of monolithic “criminal personality,” but human beings, just like all the others I had known.

At the same time, I was so glad to be able to be there to put a human face on each of these offenders. Not surprisingly, the stories many of them told of their own childhoods were also horrific. Many of them suffered abuse, neglect, and/or poverty. Many of them had a number of relatives in prison. Many of them had been crime victims themselves, or knew people who had been.

Of course these sorts of hardships do not excuse violent, hurtful behavior. Nothing excuses such behavior. And nothing can bring back murdered loved ones for those who lost them, or fully heal victims of assault or attempted murder. But it is extremely clear to me that these offenders’ own traumatic experiences did set them up to be much more likely to commit these crimes. If we, as a society, want to stop violent crime, we need to stop violence from being committed against children. And whenever violence happens – by anyone, to anyone – we need to work together as a community to heal all affected parties as much as we can.

This is the basis of restorative justice: recognizing that when a violent crime happens, many people are affected, and all those people need to heal from the trauma, if we are to stop the cycle. Our current criminal justice system falls far short of that ideal. Rather than rehabilitation, in many cases offenders are simply locked up, warehoused, treated disrespectfully by correctional officers (who have their own unhealed traumas, and who commit suicide at alarming rates) and largely forgotten by society. Some members of society are glad to imagine “throwing away the key” for these folks, wanting them to suffer in penance for the suffering they have brought to their victims.

Meanwhile, however, the victims themselves very often do not receive the true healing they need in order to move forward with their lives. They are expected to feel better knowing that the offender is locked up and being punished; but this reality does nothing to actually heal the pain of their experience of the crime.

And, with relatively few exceptions, most of these inmates will one day be released. If they have been “punished” by incarceration, but not given opportunities to heal their own traumas, as well as truly recognize and understand the pain they have brought to others, then their chances of re-entering society in a constructive way, supporting themselves and making contributions to the greater good, are very slim. More likely, the habits they have learned in prison will express themselves in post-release behavior, and more people may end up hurt.

Teaching NVC to these particular inmates has been incredibly rewarding for me, because I have seen many of them finally begin to face and acknowledge their own pain; take responsibility for the pain they have brought to others; and begin to see themselves, and their relationship to the world, in a new light. Many of them want to contribute to society, either after release or from behind bars. Some want to write. Some want to work with at-risk youth. Many would like the opportunity to apologize to their victims and do what they can to repair some of the hurt.

Many of them will not have the opportunity to contact their victims, because by law in Oregon, any contact between victims and offenders must be initiated by the victims. I fully understand and support this. However, I am very heartened by a program that is just beginning, which will allow inmates – including some of the men in this class I just finished – to be trained as “surrogates” for restorative victim-offender dialogues. This means that if a victim does want to initiate a mutually healing conversation with their offender, but the offender is not willing to agree to the process (which involves months of preparation for each side with skilled facilitators, prior to the meeting), then the victim can meet with a surrogate instead. The surrogate would be an inmate who committed a similar crime. Studies have shown that both victims and offenders receive almost as much healing in such meetings as in those with the actual victims and offenders. I am inspired and hopeful to imagine some of these students – and either their own victims, or other victims of similar crimes – meeting and finding healing for both sides, acknowledging the damage that has resulted from the crime, and acknowledging a mutual willingness to see each other’s humanity, and move forward in goodwill.

For my part, I am simply honored to have been given a glimpse into a world very far removed from my own. I am honored to have been able to contribute, even in a small way, to the personal awakenings of some people who have led very troubled lives and who are looking for a new way to live. They have enriched my life, and I wish all the best for each one on his journey.

I would like to implement a regular feature here, perhaps weekly. I often post inspiring articles on my Dream Into Change Facebook page. But, of course, Facebook shows them to very few followers; and besides, you may not be drawn to following me there. So, once a week or so I will plan to aggregate those stories/links and post them here (in the style of Bikeportland.org’s “Monday Roundup,” from which I often enjoy culling such tidbits).

Let’s take a look at what I’ve discovered this past week:

I hope you’ll enjoy this weekly feature! Feel free to share (constructive, please) comments on any of the articles, or to send me “news tips” of other items you may find. I’m especially interested in learning about, and sharing, stories of people doing innovative things to support the greater good, especially in regard to my four main areas of focus: 1) veganism and compassion toward animals; 2) sustainable energy and transportation; 3) Nonviolent Communication (NVC) and restorative justice; and 4) touch- and sex-positive culture.