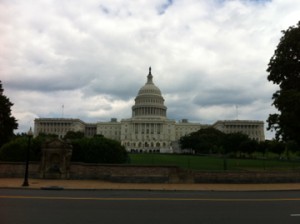 I am somewhat chagrined.

I’m writing from the train, heading to Raleigh with my sweetie, Brian, who has joined me for the second half of this empathy tour.  We had an enjoyable few days in the Washington area, but I very much regret to report that I was not able to sit with my sign for long enough to get any takers.

When I initially envisioned this trip, the idea of offering empathy in our nation’s capital – the place where decisions that affect the entire world are made on a regular basis – was a central part of it.  I imagined sitting on the steps of the Capitol building with my sign, attracting attention from tourists and “Washington insiders” alike, and perhaps even offering empathy to people who might play some role in important decisions.  I wanted to be close to the halls of power, and to bring the concept – and perhaps the reality – of empathy into a place where political polarization seems to increase every year, mirroring a cultural trend toward isolation and black-and-white, us-vs-them thinking.

Perhaps I would sit on the steps of the Supreme Court, where contentious legal decisions sometimes spur protests in the area outside.

Maybe I could sit in the area near the White House.  President Obama himself has spoken of a “deficit of empathy” in our culture.  I had hoped I could play some role – however tiny – in ameliorating that deficit, by making the concept of empathy visible and human.

It was not to be.

We had three days in the Washington metro area, and the first we spent with my parents in Loudoun County, revisiting my childhood home and environs, and taking a short jaunt to Harpers Ferry, West Virginia, where we even stepped onto the Appalachian Trail.

The next two days we spent in the District of Columbia, but the first day – as we traveled about the National Mall as tourists, and I kept an eye out for good spots to sit with my sign – we were soaked by a rain that lasted all day, even occasioning flash-flood warnings in parts of the area.  I could not see any dry place to set up “shop,” so we spent the day indoors, exploring some Smithsonian museums.

The forecast was dry for the next day, so I was hopeful that I would be able to get in at least one, and possibly two, on-the-street empathy stints.  We headed out on Capital Bikeshare bikes (wonderful experience – I am sold on the bike-sharing concept) toward the Mall again.  Brian pedaled toward the tidal basin to see the MLK, FDR, and Jefferson memorials, while I set my sights on the Capitol building.

When I got there, however, I was reminded of the scale of the Capitol, and indeed of Washington itself. The city, as I have often recalled from my childhood visits and field trips, is built on a grand scale, rather than a human scale.  Compared to Portland, the city blocks seem to stretch forever.  The Mall itself is a truly enormous public space.  The buildings inspire awe, and hearken to a time when people were building both physical and psychic infrastructure for a grand new nation, filled with promise.

These streets, parks, and buildings are impressive to behold and to photograph, but in my felt-sense experience, they dwarf individual humans, and do not lend themselves to community-building in the way that public plazas in Portland, Boston, New York, and other cities do.  Certainly there are neighborhoods in DC – perhaps most of them, in fact – that are much better suited to these social needs.  But in the places that house the halls of power, I saw expansive stone surrounded by mobs of tourists, and I didn’t experience the feeling that I get when I know I’ve found a good spot to sit with my sign.

I started at the Capitol, but almost no one was passing by on the steps.  There was actually some police activity going on there at the time, and two separate officers asked me to ride my bike on the “wrong” side of the double yellow lines in the street, in order to avoid their cars.  I don’t know what was happening; but I determined that the Capitol would not work for my purposes.

Next I cycled to the Supreme Court, just a few blocks away.  Again, though, I saw an imposing building with no one on its steps, or even many people walking nearby.  No protests, or people gathering nearby.  I could see I would not have any takers.

A friend had told me that the Smithsonian Institution’s Portrait Gallery’s steps were a popular lunchtime spot for downtown workers, so I tried sitting there with my sign for about fifteen minutes.  I didn’t get any response, though, and most people didn’t even see the sign, because they were walking past the steps rather than up them.

Time was ticking.  I needed to meet up with Brian so that we could see the White House.  By the time we got there, we could only stay for a few minutes before leaving to get to our hosts’ house just outside of town.  Surveying the scene at the White House, I’m not sure whether it would have been a good spot to offer empathy, either, since again, it was filled mostly with tourists taking in the sights in the midst of their packed itineraries.

So… my time had run out.  I felt sad and disappointed that what I had imagined as the capstone to this trip had not come to pass.

Since my parents live in the area, perhaps I can return within the next few years, and maybe try it again.  Seek out more neighborhood-based locations.  We shall see.

But, for now I’m looking forward to spending some time in the South, and keeping my fingers tightly crossed that the predicted rain- and thunderstorms (amid 95-degree temperatures) will break for at least a few hours so that I can set up my sign in Raleigh and/or Chapel Hill.