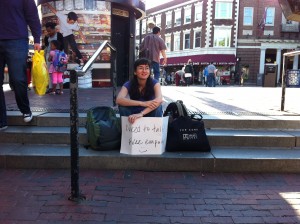 Day Three out on the street.  In this case, it was Harvard Square, in the early evening.  I had walked to Harvard from MIT, taking in the various sights along the way in the beautiful sunshine.  As I approached the square, I saw a weathered, middle-aged man holding a cardboard sign that read, “Seeking human kindness.”  Although of course I understood that he was specifically seeking donations of spare change and bills, I enjoyed the wording of the sign, and I briefly considered pulling out mine a little early, simply to show it to him so we could exchange smiles about the synchronicity.

Instead, I found a spot to sit right at the entrance/exit of the Harvard subway stop, and took out the sign to face the throngs exiting the station. It was pretty busy at rush hour, and no one was stopping at first.  Most didn’t even look at me or my sign.  They all seemed in a hurry to get wherever they were going.  I wondered if I should try re-positioning myself somehow.

Then the man with the sign approached me.  I smiled; but he seemed wary.  He asked if I had a psychology degree.  With a wry smile, I admitted that I did.  Then the conversation took a turn I hadn’t expected.

He did not like what I was doing.  He urged me to stop doing it.  Multiple times.

His concern was that someone mentally unstable might come and talk with me, and I might give them advice that would make them feel worse, and that might do serious damage to them, even to the point that they might harm or kill themselves.

I told him that I don’t offer advice, I just listen.  This did not change his opinion at all.  He said that most people would want advice (which has not been my experience), and I might end up giving some in spite of myself.  And even if I didn’t, I might make a seemingly innocuous, well-intentioned remark, but someone with severe psychiatric or emotional problems might take it “the wrong way,” or give it too much credence, and might make poor, self-harmful decisions as a result. He said that he himself had been suicidal at times, and also that he had a friend who had been to a well-meaning therapist, who said something seemingly innocuous and the friend took it the wrong way and killed himself.  He said many “bad therapists” do those sorts of things.  Would I want that on my conscience?  (He didn’t mention anything about legal liability, but I sensed that might have been part of his concern too.)

Well, no, I wouldn’t.  What he was saying did give me pause.  But I remained connected to my heart, and to the hope and trust and love and faith that resides there.  I could see how his concerns were coming from a place of fear.  Possibly very “justified” fear, given his experiences… but still fear.  I believe that the kind of decision-making that most benefits ourselves, others, and the greater good comes from love, trust, and faith rather than fear.  I mentally began mapping the exponential social consequences of our differing approaches: everyone choosing not to engage with troubled strangers in fear of harming them, vs. the amount of help and connection that could be built by people taking the risk to open their hearts and offer support to others.  I thought of all the smiles and “thank yous” I had received in my time sitting with my sign in various locations, and all the support people have shown me in taking this tour.  To me, the greater good clearly comes from attempting to help, in good faith.

I conversed with the man for five or ten minutes – making an extra effort to listen and reflect what he was hearing more than interjecting my own perspectives, though I did do some of that – and we stared deeply into each other’s eyes on several occasions, each (I believe) hoping the other heard and understood our points.  Neither of us changed our positions.  When it seemed to me that he had said all he wanted to say to me, I thanked him for sharing his perspective, and told him I respected what he had shared.  I meant it.  I’m not sure if he believed me, however, because I also told him that I was choosing to continue.  He said something like, “It’s your life.  I just hope you don’t hurt anyone.”  I sat down again, about 15 feet away from him.  He was now facing outward from the station with his sign and cup (which passers-by were adding to, even during our discussion), so we were effectively facing each other.  A little awkward; but it felt right to me to stay at that location.

I pondered what he had said.  I felt deeply sad to think that his life had been so traumatic (he made some allusions to things that had happened to him, “that you probably couldn’t handle hearing”) that even someone making a simple offer to listen struck him as a dangerous, high-stakes proposition.  I felt sad to think that the power of empathy was not apparent to him.  At one point in our conversation, I had mentioned that what I have personally liked best about receiving therapy myself is when the therapist just listens, with support and respect for my own process, and that that is what I enjoy offering to others.  He replied that if I had been to therapy myself, I definitely should not be doing something so dangerous as listening to others, because “you’re just as screwed up as they are!” Wow.  Not my perspective at all.  (He did follow up by volunteering that no one can solve another’s problems for them; we all have the answers inside ourselves.  I wholeheartedly agreed, and said that was part of why I love to do this, to help others uncover their own answers.)

As I sat there after our talk, within about a minute a young woman approached me and exclaimed how happy she was to see me there.  She took my photo, and when I handed her a flier explaining my tour, she shared that she runs a blog about mental illness, and that she thinks so much mental illness could be prevented or helped by more human interaction, listening, and empathy, so she was just thrilled that I was sitting there offering it.

What a range of perspectives.  This is an emotionally charged topic.

For the remainder of my time in that spot – about half an hour – I didn’t get any more “takers.”  I think perhaps that location was a bit too fast-paced for what I was offering.  But I did get several other smiles, waves, photos… those who saw me all seemed happy I was there, except for that one man.  As I stood up to leave, I walked over and thanked him again for sharing his truth and concerns with me.  He clearly still wasn’t happy that I was doing it.

I’m glad I at least took the time to listen to him.  And I certainly wish him the best on his path.

At the suggestion of my friend Dennis, who had stopped by to say hello toward the end, I then went to another public square about a block away.  It was quieter, especially since it was 7:00 in the evening by then.  Not many people walked by, but I did meet a man in his early 20s, wearing a zebra outfit and scooting around in his friend’s wheelchair.  We had an uplifting chat about how he likes to travel around the country, talking to strangers and urging people to live from love rather than fear.  Quite a poignant contrast.

Turns out he’s friends with the other man, too.

Life is very complex.  And this empathy tour is pretty interesting so far.

2 thoughts on “A new perspective”