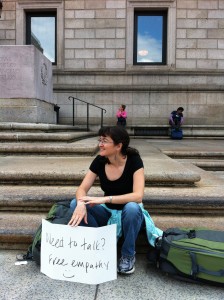 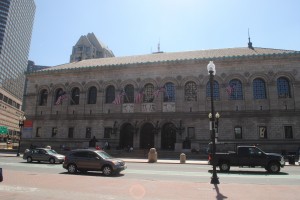 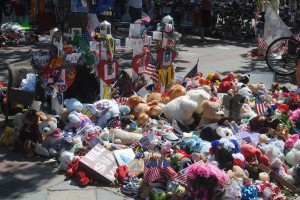 I arrived around 3:00 in the afternoon.  Almost as soon as I sat down, a woman came up, smiling, and asked to photograph me.  I agreed, and asked her to also take one with my camera (pictured above).

After that, though, I got almost no response for about 20 to 30 minutes.  Occasional smiles or photos, but mostly a whole lot of nothing.  I wondered whether I needed to choose a new location.

A man in his early 60s, casually but neatly dressed, approached and asked me if I were asking for empathy or offering it.  When I said I was offering it, he began almost immediately to speak very intensely about what sounded like an incredibly painful experience he was living through.  He got more and more emotionally agitated, and he spoke for about half an hour.  His voice got louder and louder.  He gestured broadly.  He expressed anger, and at one point some tears welled up. His energy built and built.  His saliva became foamy.  His words, tone, and body language conveyed an almost unbearable desperation about the situation.

I could not tell whether his story was “real,” or whether some mental condition had conjured an elaborate, agonizing ordeal that he simply believed to be real.  The story involved multiple court cases; a newborn son in the Philippines whom he was not allowed to see, and who might be at risk of being sold; harassment and arrests by various law enforcement agencies, despite no legal or moral wrongdoing on his part; and multiple unanswered letters and phone calls to various government agencies, both locally and overseas.

He kept saying things like, “Who will listen to me?” and “Who will help me?”  But he didn’t seem to be actually seeking responses.  I listened intently for about ten minutes – while onlookers paused and took in the scene, wearing a variety of facial expressions – but then he began moving slightly down the sidewalk, addressing others on the library steps rather than me.  He shouted toward them for about another fifteen minutes.  I wondered if this opportunity for expression was helping him in some way.  I hoped it was.  However, the lack of immediate, tangible “help” from anyone listening seemed to disappoint, frustrate, and sadden him.  When he finally walked away, throwing a half-hearted “Thanks for your empathy” toward me over his shoulder, it didn’t appear that his emotional state had changed much.

I felt sad.  My hope and belief is generally that such opportunities for expression help people to feel better.  But, I guess it may not be true in all cases. And, of course they are only one small piece of someone’s life and circumstances.

After he left, I sat quietly for a few moments, with my sign folded so as not to be visible to others.  I let the experience soak in.

And then, with about a half hour left in what I had intended to be a 90-minute stint, I allowed the thoughts and feelings to ebb away… and I put up the sign again, and sat with a genuine – if a little less bright than earlier – smile, hoping to offer empathy to others.

2 thoughts on “A different experience”