Hitting the sweet spot in Raleigh 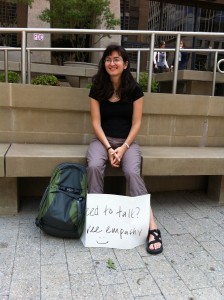 At the Wake County Courthouse

Well… the tour is wrapping up!  Today we’ll be boarding a plane back to Portland, the East Coast Empathy Tour on its way to becoming a memory.

Yesterday, in Raleigh, I found the sweet spot.  At the suggestion of my aunt and uncle, we headed for downtown near the lunch hour, and I set up my sign on the steps of the Wake County Courthouse.  The sun was shining, the temperature was pleasant, and people were out and about.

Within seconds, I felt at home.  People smiled at me, gave me thumbs-up, and shared words of encouragement and appreciation.  It was great to be back in the flow!

The first woman who approached asked me what I was doing.  I told her, and she said, “Well, I’m homeless right now.”  She paused, then continued, sadly.  “Ain’t much to talk about, being homeless.”  I was surprised to hear her say this, because in Portland I found that homeless people tended to talk with me at length.  But she seemed sincere, so I nodded and said, “Well, I’m happy to listen if you ever do feel like talking.”  She nodded in acknowledgment, and went to sit with a friend.  Then she called over to me, “Show him your sign!”  I did, and he seemed to approve.

A minute or so later, an older couple walked by and seemed delighted to see me.  A few minutes after that, they came back, and the man said, “I’m so glad you’re still here!”  They wanted to talk about what I was doing, and take my picture to post on Facebook.  This is exactly the sort of response I love!  I hope that by sharing the photo of me and my sign with their friends, some new people will be inspired about the idea and power of empathy.

Then a man walked by and studied the sign for a bit.  He asked a question to clarify what I was doing, and then shared that he himself does something similar.  He works in some sort of ministry, approaching people on the street who have lost hope, and helps them to believe in themselves and find ways to move forward in life, following their hearts.  He spoke for about a half hour, and at times his explicitly Christian sharings bordered on proselytizing.  Not surprising, given what he had told me about the way he spends his time.  But although I did not agree with everything he said, I enjoyed experiencing his positive energy, and found some of his personal stories of overcoming major life challenges to be engaging and inspiring.  I always enjoy connecting with people who seem lit up by life, love, and purpose, and this man definitely was.

After he left, a young woman stopped by and asked if I would be there every day.  No, I said; unfortunately today is the last day of my tour.  She looked disappointed.  “But I’ll be here for another half hour,” I offered, thinking perhaps she could come back.  She said, “Oh, no – I’m fine today!  But some days…” with an expression that said she could really appreciate the value of having someone to talk to after a rough day at work.

An elderly woman came by, pushing a cart.  She puzzled over what I was doing, and then said she knew what she wanted to talk about.  “I want this war to end.”  I smiled sadly and nodded.  She went on to say that she believed President Obama was doing a good job, and trying really hard.  Then things turned a bit surreal.  She mentioned that she had recently written to his cousin, who would probably pass along her message to the President.  Then, the two of them would probably invite her to go on an important political road trip with them, probably around Thanksgiving or Christmas, when all the residents in her group home get the holidays off.  She was looking forward to the trip, and added that she would need to stop by Goodwill to get a good suitcase for it, probably no later than September.  I listened to all of this, nodding supportively.  She reiterated that she wanted the war to end.  Then, apparently satisfied that she had been heard, she walked on.

Shortly before I wrapped up, a man came up on a bicycle.  He said he was a busker, and had been playing his accordion in various cities along the East Coast, most recently Savannah, which he had really enjoyed.  Based in upstate New York, he was a bit concerned whether it was legal in Raleigh to simply busk on the street without a permit.  I didn’t know, so we said goodbye and he pedaled off to inquire elsewhere, carrying the accordion on his back in a large pack.

In between all of these interactions, I was touched by how many people just smiled and said encouraging words.  I had come full circle in this tour: the experience reminded me both of Portland, and of my first day on the tour, in Boston.

I have learned a few things about how to do on-the-street empathy:

The size and scale of a city is important, and finding the right public spot is key.

Weather can play a big role.

But, region to region, people are people.  And it seems clear that people in today’s world appreciate the value of empathy.

I am deeply honored to think that I have been able to play this particular, tiny role in hearing people who have wanted to be heard, inspiring people who hadn’t been expecting to be inspired, and bringing to consciousness people’s innate appreciation of being heard in a supportive, warm, non-judgmental way.  I don’t know what the future holds for me, in terms of continuing this on-the-street work; I will be listening to my heart over the next few weeks and months to see if I want to continue it on any kind of regular basis, in Portland or elsewhere.  But this tour has been a wonderful experience.

I want to take this moment to thank each and every one of the people who have supported me in any way, and there are too many to list by name!  Some people contributed money.  Some people opened their homes to me and/or Brian to offer lodging (and in many cases, amazing food as well).  Some people shared my campaign and/or blog postings with their friends, or on Facebook.  And many, many people offered encouragement and moral support throughout the process.  I am grateful to all of you, and thrilled to see what we have all brought to pass.

Until the next step of the journey…!