Day One of Listening: Boston Common 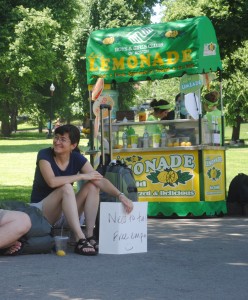 Listening on Day One

On Sunday morning, June 2nd, I headed into town on the train, intending to sit and listen in Boston Common.  I got off at the appropriate stop, but wasn’t sure quite how to get to the park.  I glanced at the map on my phone, and started walking.  I asked a few people, but they turned out to be tourists.  Finally I found a local couple, who said, “That’s just where we’re headed!  Follow us!”  They took me on a winding route, and sure enough, I got where I wanted to be.  As we parted, the woman said, “I don’t know if I would trust strangers to lead me around an unfamiliar city!”  I had to smile at the irony of her statement, and I said, “I’m actually here in town in order to listen to strangers.”  She said, “Oh… well then, you’re off to a good start!”

And, my first on-the-street empathy session of the tour went as well as I had hoped.  On this hot and humid day, I stationed myself prominently on a sidewalk in Boston Common, near the Massachusetts statehouse.  As people began to notice me with my sign, I got thumbs up, words of encouragement and appreciation, high fives, people taking photos, people stopping to talk… it was just as rewarding as in Portland.  As I already knew, the need for empathy is universal.

A man visiting from overseas was the first to stop and ask what it was all about; he left with a smile on his face.  An enthusiastic young woman stopped to muse about hope, and whether it’s possible for people to change their lives, permanently, for the better.  A man who works as an advocate for homeless people stopped to talk about the challenges homeless people face, and the ways that non-homeless people and politicians could help.  Another man, homeless himself, talked about losing his job, and also reminisced about his time in the military, when he was respected and given freedom and empowerment of various kinds.  (Inwardly, I wondered and hoped about other, less violent, possibilities for ways people could find empowerment, adventure, and financial stability in their lives, since these things were clearly meaningful to him, as they are to all of us.)  Several other people stopped and talked about other topics.  As usual, I found it fulfilling to listen to whatever was real for people, and to converse about some topics that are meaningful to me.

Afterward, I met with a friend for lunch, and we walked together to the Boston Marathon memorial site.  As it turns out, it is right across from the Boston Public Library.  Both were spots I had considered for sitting with my sign… so now I have an official plan to do so.  Either tomorrow or Tuesday… and on the other of those two days, I will head to Harvard Square.

This evening I met up with some friends I had known in Portland, who now live in Salem.  They are graciously hosting me in their beautiful home; tomorrow I will head back to Boston via the ferry.  What a wonderful adventure this trip is!

2 Responses to Day One of Listening: Boston Common